This part of the Plant is focused on the mixed MSW loading into the waste treatment system and further production of RDF. 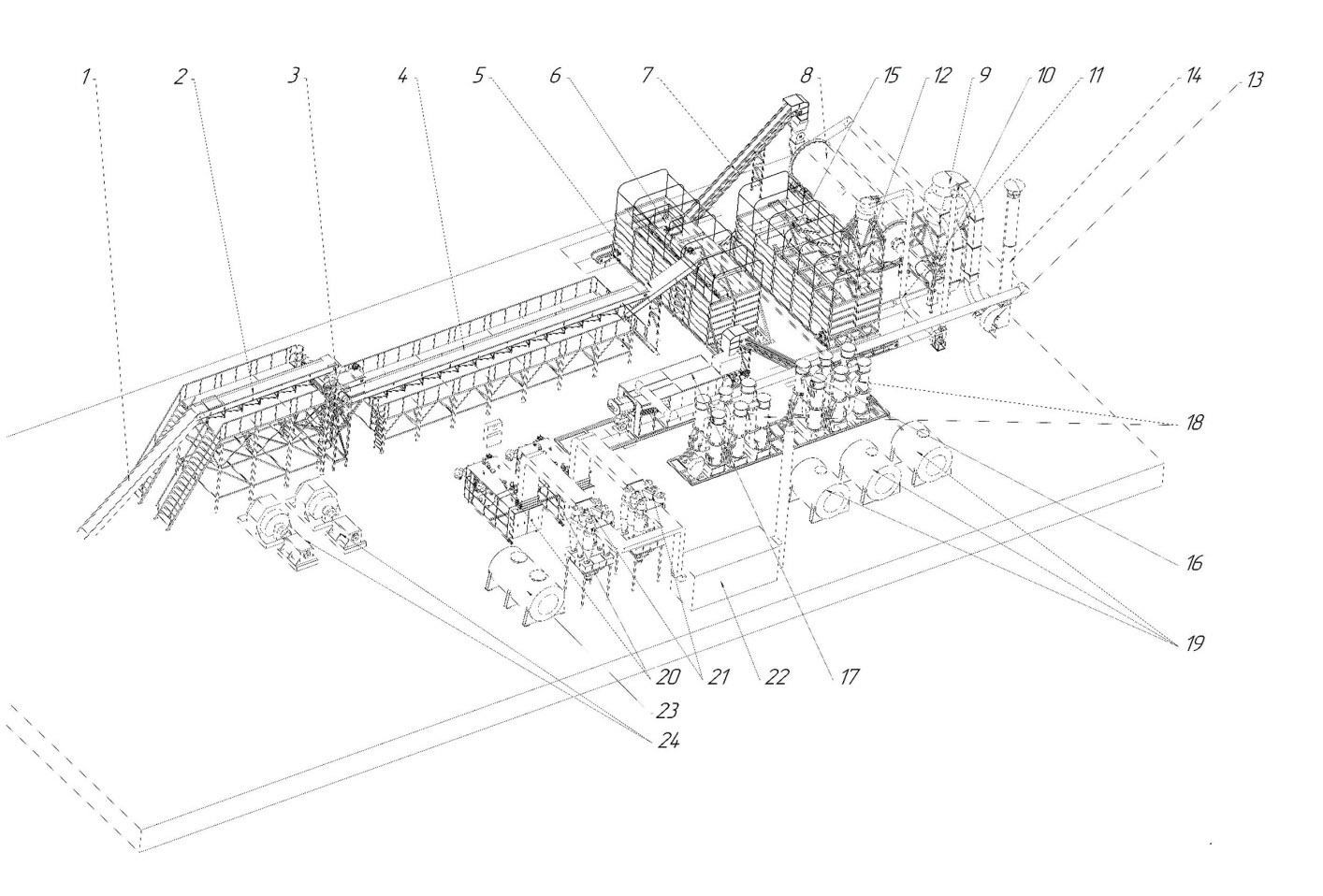 Mixed MSW are loaded into the receiving conveyor belt (1), then directed into the sorting line (2), where glass, stone, metal and other non-organic particles are selected manually.

After manual selection, the sorted waste mass is transported into the initial shredder (3), where it is crushed to reach the 20-50 mm particle size. After crushing procedure waste mass is being transported with the conveyor belt (4), then with the conveyor belt (5), and at least it is loaded into the storage tank (6). The capacity of this tank is 100 m3. It is equipped with the «moving bottom» and aimed to receive the waste and store for some time, and to feed the system with appropriate batches of waste. From the storage tank the raw materials are moved to the conveyor belt (7). This belt feeds the tumble (rotary) dryer (8). Inside the dryer the moisture evaporates from the waste mass. After drying the moisture content of waste is reduced to 10-15% (the initial moisture content is 40%).

The mixture of air with heated output pyrogas becomes the heat-transfer agent for the tumble dryer. The exhaust gases are directed with the pipe system from the furnace (burner) of RDF processing unit (pyrolysis reactor, 17) into the mixer of the tumble dryer.

The “aspiration” technology (vacuum’s suction) is applied to transport the dried waste from the tumble dryer into the main cyclone (9). Inside the main cyclone the dry waste products are separated from the air, exhaust gases and moisture generated during the drying procedure. From the main cyclone the dry waste materials are moved to the hammer mill (10), where they are crushed and reground to the appropriate particle size (the raw material becomes homogeneous). The fraction of the input raw is 20-50 mm. The fraction of the raw materials after regrinding is 5-10 mm. After the hammer mill the raw material is directed to the dry raw transporting system (11) aimed at dry raw collecting and further moving through the facility. The dry raw is carried by the aspirator (fan) with the aspirator’s pipeline into the cyclone (12). It is equipped with the batcher.

From the cyclone (12) dry homogenous raw is delivered to the secondary storage tank (15). The capacity of this tank is 100 m3. It is equipped with the «moving bottom» and aimed to receive the waste and store for some time, and to feed the system with appropriate batches of waste. From the storage tank the raw material is moved to the conveyor belt (16). Then, the waste is transmitted to the RDF processing unit (pyrolysis reactor, 17).

The thermal treatment of RDF is carried out in the active part of the reactor and accompanied by gas condensate mixture generating. RDF after moving through the pyrolysis reactor transforms into the solid carbon residue (pyrocarbon). The pyrocarbon is moved into the special storage tank to be unloaded with the screw mechanism (auger). The temperature range inside the continuous pyrolysis reactor is 650-700 oC. This temperature range and oxygen-free condition of the pyrolysis process ensure the complete thermal decay of the raw material excluding emissions of hazardous substances like dioxins, furans, etc.

The primary purification of the produced pyrogas is carried out inside the cyclone, then the gas is directed to the pyrogas purification and cooling system (18). The system includes two heat exchangers cooled with the air, containers to collect condensate, and separators (mist extractors). It is focused on drops, dust and other particles separation from pyrogas, as also on pyrogas cooling before feeding of boiler’s burner assembly.

The condensate is pumped out with the pump from the collecting containers into the storage tanks for liquid fuel (19).

The solid residue of the pyrolysis process (pyrocarbon) has high calorific value inasmuch as its carbon content is up to 90%. The particles size is 1-2 mm. This output material is applied as fuel to feed the burner assembly of steam boiler (20). The pyrocarbon is unloaded with the conveyer screw from the continuous pyrolysis reactor into the storage tank, then it is moved to the boiler`s burner. The burner assembly of steam boiler is equipped with special container to collect the ash, which is generated as a result of pyrocarbon combustion. The ash should be periodically removed from the container.

Two steam boilers are included into the Plant structure. One boiler is able to produce 4-6 t of steam per hour. The boilers’ burners are able to operate on three types of fuel:
- solid high carbon product,
- pyrogas,
- liquid fuel.
The steam to feed the steam engine is generated inside the boiler as a result of the high-efficient combustion of all output fuel products.
The steam from the boilers moves via the steam pipeline directly to the steam engines, which transform the steam energy into rotation. Then, the steam moves to condensing system, where water (condensate) is collected. The condensate is directed to deaerator, where the gases are separated from the water. The water is transported from the deaerator back into the boilers. The container for water storage (23) included into the layout to prevent the stop of steam boiler operation. The operation scheme of steam boiler and steam engine is closed.

The exhaust gasses appear in the RDF processing unit unavoidably. They emit into the atmosphere via the smokestack system.
The Plant is equipped with the exhaust gases purification system to avoid hazardous substances emission into the atmosphere (not exceeding the limits in accordance with EU Regulations). Moreover, the specific design of the continuous pyrolysis reactor and its temperature range ensure hazardous substances content reducing to the minimum level during the RDF thermal destruction.
Gas purification is carried out as described below:

After purification procedure, the clean gases emit via the smokestack system.

After purification procedure the exhaust gases are removed by the smock exhauster (13) via smock stack (14).